Yalemzerf Yehualaw makes a name for herself in London

Have you watched Power Slap: Road to the Title on TBS? Highly recommended for torturing prisoners of war. It’s awful and I wrote about...
Read more

Yalemzerf Yehualaw’s first name translates as ‘the edge of the world’. Certainly, in the world of marathon running, the 23-year-old from Ethiopia now has the world at her feet after storming to victory in the TCS London Marathon in 2:17:26.

Yehualaw became the youngest ever winner of the women’s race in the British capital on Sunday (Oct 1) despite stumbling briefly on a speed bump at around 20 miles, losing 20-30 metres to the leaders in the process. Picking herself up and dusting off minor injuries to her left hip and knee, she soon after injected a ferocious 23rd mile of 4:43 to break clear from reigning champion Joyciline Jepkosgei of Kenya.

Cruising across the finish on The Mall, she clocked the third fastest ever time by a woman in London (behind Paula Radcliffe and Mary Keitany) and this follows the quickest ever female debut marathon of 2:17:23 in Hamburg in April, not to mention a 29:14 world 10km record she ran in Castellon in February.

The Ethiopian has also been a regular at the Antrim Coast Half Marathon lately with a 63:44 win in 2021 that was frustratingly ruled invalid as a world record due to the course being 54 metres short. She returned to the same race last month, however, to run a UK all-comers’ record of 64:22 and now the organisers of the London Marathon will hope she returns to the capital to defend her title in April.

“I am so happy to win here in London. I have worked very hard to prepare for this race and to take the victory is amazing,” she said.

Asked if she will one day be the No.1 in the world in her event, she simply nodded and replied confidently: “Yes.” 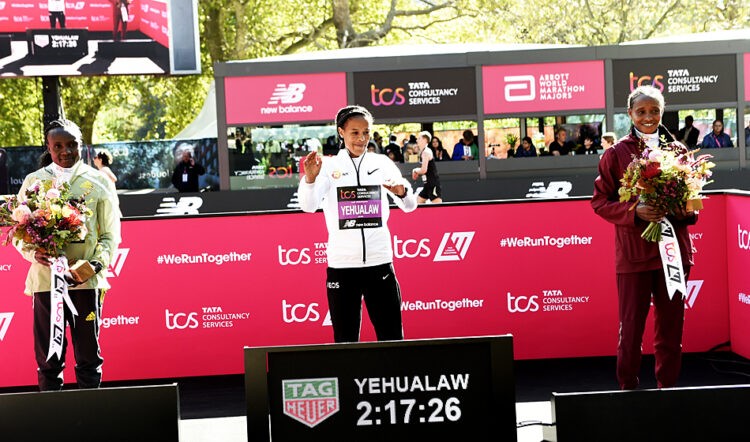 In sixth, Mary Ngugi, who is coached by Steve Cram and has been a training partner of miler Laura Weightman in recent years, ran 2:20:22.

First Brit, meanwhile, was Rose Harvey with 2:27:59 as the second fastest Brit of the day was Hannah Alderson with 2:35:56 from the mass start as Steph Twell clocked 2:39:16 after having run with Harvey during the early stages.

This followed the race day withdrawal of Charlotte Purdue, the first Brit in London last year, who had been feeling ill since Friday and made a last-moment decision not to run. 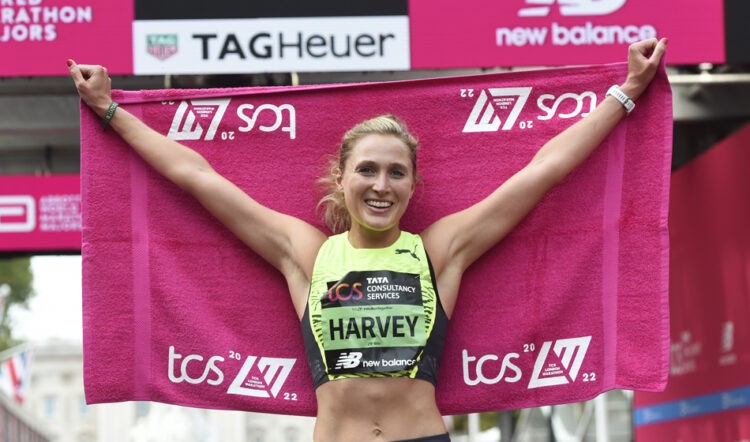 The day belonged to Yehualaw, though. The young runner was born in a small town called Finote Selam, in the Gojjam area of the Amhara region of Ethiopia, just north of the capital Addis Ababa.

During her youth she was the star runner in the town with Genetu Molalign, a 63:51 half-marathon runner who has gone on to be her husband. Now, the pair live in Addis where she trains full time.

Explaining her background, she said via an interpreter: “I started running at school seven years ago in high school and I was part of a project where I came to Addis Ababa and was part of the Ethiopian youth and sport academy.

“I stayed there for four years and at the end of that I met my coach, Tessema Abshero (2:08:26 marathon runner), and that was when I started competing and began to have success in my running in 2019.”

Yehualaw won the Great Ethiopian Run 10km in 2019 and then retained the title this year. In the run-up to London she was running around 180-195km or 110-120 miles each week and looked full of running in the final stages despite her fall and the savage pace she injected to surge away from Jepkosgei.

In London she followed the pace through halfway in 68:46 and reached 21 miles with Megertu, Korir and Jepgosgei for company. But once she decided to cut loose, she was a class apart and Jepkosgei later said that she ran the best race possible but it was only good enough for second place.

Maybe Yehualaw has got some tips from Eliud Kipchoge? The idea is not too far-fetched because although they are from different east African nations they are members of the same NN Running group in the Netherlands and on Sunday she was wearing an INEOS 1:59 Challenge wrist band inscribed with the world record-holder’s mantra “no human is limited”.

Perhaps she can follow in Kipchoge’s footsteps by breaking a world record one day too. The women’s best mark is held by Brigid Kosgei with 2:14:04 and, although the Kenyan withdrew from Sunday’s race with a minor injury, the duo could meet on the roads of London again in seventh months’ time.

Double Olympic champion will plunge straight into the deep end as she faces as fearsome line-up in her 26.2-mile debut in London Sifan...
Read more
Top Athletics

Almost two dozen British athletes will make the long trip down under to Bathurst for 44th edition of event As we approach the...
Read more
Top Athletics

Marcel Hug and Catherine Debrunner return to the marathon to face David Weir and Manuela Schär among others on April 23 The richest...
Read more

Have you watched Power Slap: Road to the Title on TBS? Highly recommended for torturing prisoners of war. It’s awful and I wrote about...
Read more
Scores

The NHL will always be a niche sport — and that’s...